The store will not work correctly in the case when cookies are disabled.

Spandex House is one of the largest spandex suppliers in the world with a global client-base. Established in 1991 and based in NYC Fashion District, the company has stood by its strong morals and principles for supplying customers with the best fabric selection at the lowest price. “It’s our philosophy from start to finish that the customer is our number one priority and that’s why we’ve been around for 30 years,” says Sabu Nath, CEO of Spandex House.

Mr. Nath has been the main driving force behind the success of Spandex House since its inception. Migrated from Bangladesh at the age of 27, Mr. Nath began his career in Textiles working for Gladstone Fabrics that specialized in Theatrical Fabric supply while working with some well-known Costume designers. It was there that Mr. Nath established many key contacts throughout his career.

“In 1989 Gladstone moved North and I began to work more closely in the costume, dance, and performance apparel trades,” Mr. Nath recalled. “I began this journey by working from home and delivering samples to clients while cultivating many long-term relationships,” he added. One noted and famous designer was Barbara Metera. “Barbara and I worked closely, which led me to many other notable designers like Michael Jon costumes, AnNA SUI, and Norma Kamali just to name a few,” recalled Mr. Nath. Ringling Bros Circus and Cirque du soleil were among the A-list of clients at Spandex House. As the company grew, its reach expanded to Canada, UK, Australia and throughout the Caribbean Islands.

Our fabrics go into some of the everyday stuff you see from swimwear, costumes, bras, belts, gloves and hosiery -- you’ve probably run into spandex on a daily basis. Most of the clothes we wear contain some type of spandex, so there is always a demand for spandex and Spandex House will keep supplying it. 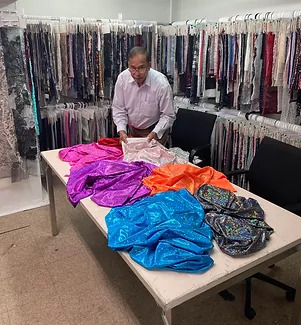 Copyright © 2022 SPANDEX HOUSE INC. Powered by Magento. Ivaninfotech is responsible for creating all accessibility requirements. Spandex House & Ivan Infotech are committed to providing a website that is accessible to the widest possible audience, regardless of technology or ability. We are actively working to increase the accessibility and usability of our website and in doing so adhere to many of the available standards and guidelines in this website.